Alberta Township Systems – What is it and how it works

What is the Alberta Township System?

Alberta Township System is a land survey system used in Alberta to divide land into one square mile sections. It is based on the Dominion Land Survey (DLS) system that was implemented elsewhere in western Canada in 1872.  Before, it was used to define land for agriculture purposes, but the 1910 Alberta Surveyors Act was put into place to make sure the direction of the surveys were handled provincially.  As a result, Alberta’s unique system has a completely different method for marking out the land compared to systems used in other areas of western Canada (for example, British Columbia).

In western Canada, the government regulates oil and gas naming by assigning unique well identifiers (UWID) to each drill hole. However, the nomenclature is based on the Alberta Township System for wells in Alberta, Manitoba, Saskatchewan, and the peaceful country in north-western British Columbia. Now,the system is used for land leases, sales, and hydrocarbon exploration rights,since it references oil and gas wells.

Most areas of the Alberta Township grid were added in the third survey (conducted in 1881). It was later changed in 1963, when the province decided to increase the width of road allowances, and continues to change as approximately two new townships are added each year. 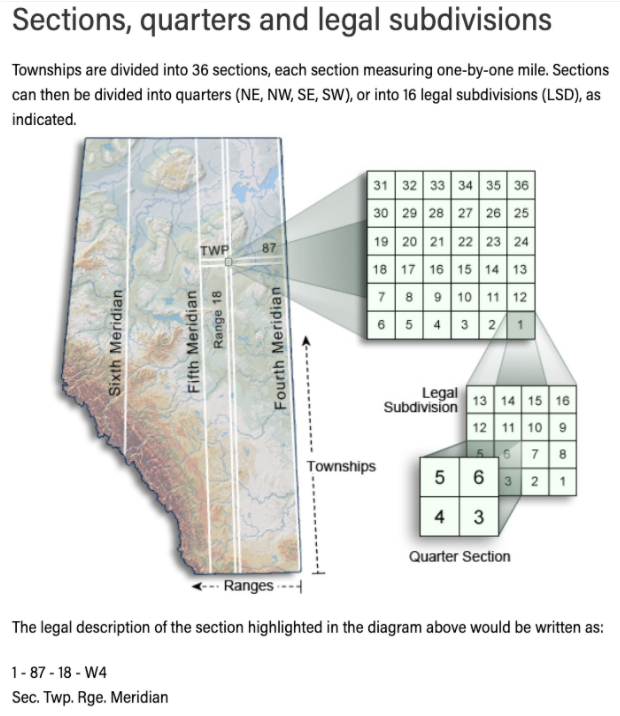 Ranges: Ranges are the six-mile columns between meridians. They’re numbered consecutively from east to west, starting at Range 1 west of each Meridian.

Townships: The townships are six-mile rows that intersect ranges. They are numbered consecutively from township 1 at the Montana border to Township 126 at the Northwest Territories border. The word township describes the six by six-mile square formed by the intersection of ranges and townships.

Township lines: Township lines are east-west lines parallel to latitude lines. Numbering starts from the first baseline, which is located at latitude 49º north.

Section: A Section is a subdivision of Townships. Townships are divided into 36 sections. Each section is measuring one by one mile. A section can as well divide into quarters or 16 legal division. However, from north to south, each section measures one mile. A section can measure less or more than one mile from east to west, depending on its vastness. A selection is precisely six miles wide along a baseline. It is less than six miles north of the baseline and south of a correction line, more than six miles wide south of a baseline and north of a correction line. However, sections are less than six miles wide if they’re directly east of Meridian.